Symbiosis was formed in 1987 around the trio of Clive Williamson, Richard Bolton and John Hackett. Their first two albums, Tears of the Moon and Song of the Peach Tree Spring were released in 1988. Tears of the Moon demonstrates two facets of their work: one side being ambient and gently relaxing; the other being highly atmospheric, conjuring up intriguing images of distant worlds. Since then, the group has gone on to record a total of ten albums including Touching the Clouds and Amber & Jade (written specially for deep relaxation and for use in complementary therapies), and have also created music for four albums of guided visualisations by Denise Linn: Angels! Angels! Angels!, Dreams, Phoenix Rising and Secrets & Mysteries; and her video Creating Sacred Space. The group has provided signature tunes and incidental music for many TV and radio productions, including Paradise Gardens (BBC2); Techno (BBC Schools) and A Family Learn Spanish (Radio 5).

Guitarist Richard Bolton is equally at ease playing Latin, Spanish, ambient, classical, folk or fusion styles on acoustic or electric guitar, guitar synthesizer or cello. He has released an album of his own jazz compositions (City Life – Ballads’n’Funk by the Richard Bolton Group) and an album of violin and cello duets with Pete Cooper (Turning Point on Big Chain Records). He has also performed with Evidence, The Happy End Big Band and Billy Jenkins. 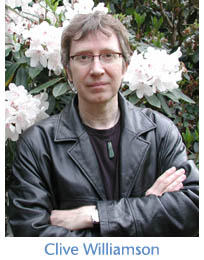 Clive Williamson sings, plays flutes, keyboard and wind synthesizers and percussion. He is the driving force behind Symbiosis and produces all their albums, creating a sensitive fusion of natural sounds and new technology. Clive has also travelled in New Zealand and Australia, making recordings for three albums of Sound Effects for the BBC and the Symbiosis release AOTEAROA – Nature Sounds of New Zealand.