Marco Lo Muscio and I had a very warm reception from the audience at Friday night’s concert at the beautiful cathedral in Teramo, Italy. It was sobering to see the reconstruction work still going on to the main tower following the 2009 L’Aquila earthquake which affected so much of this region.

Earlier in the day it was wonderful to return to Cerqueto with our hosts, Angelo  & Guiseppe Mastrodascio; and to meet again Battista Mazzetta and other friends from the Nativity Presentation. After a traditional lunch in their village in the mountains, we managed a quick a tour of their Museo della Cultura Pastorale del Grand Sasso.  It included artefacts used by local shepherds including a flute made out of a sheep’s bone – a fascinating ancient instrument, though I’m not sure I would want to attempt any of the Mozart Concertos on it.

It was heartening to see that there was a small room set aside for regular worship, as the local church had been rendered unsafe following the earthquake. This had also affected the tholas, a traditional shepherd hut built with dry stone, which Angelo helped to rebuild last summer.

After the concert (and usual amazing Italian food!) we were escorted back to our hotel by Angelo and Battista, who didn’t need much prompting to produce his beloved harmonica and serenade us as we marched along to “Here comes the bride”. Another night to remember…

This evening Marco and I will be performing a more piano based programme as part of the “Camera Musicale Romana” concert series at the Sala dell’Immacolata.

Looking forward to catching up with our old “Playing the History” friends, Carlo and Chiara. 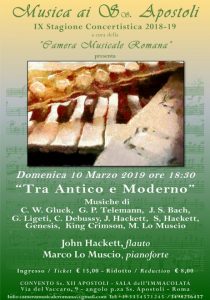